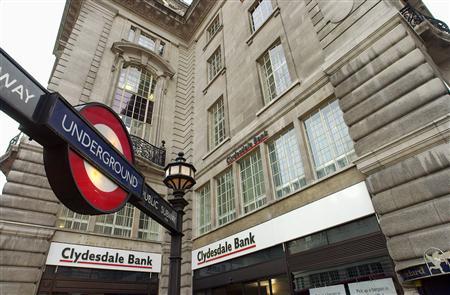 MELBOURNE | Mon Apr 30, 2012 7:40am BST
MELBOURNE (Reuters) - National Australia Bank will cut 1,400 jobs in the UK and take charges of $740 million (454.4 million pounds) after deciding it was too hard to sell or expand its UK banking business in a depressed market, it said on Monday as it flagged a record first-half cash profit.After a review of its UK unit, which comprises over 335 Clydesdale and Yorkshire branches, NAB said it would complete the job cuts by 2015, close some back offices, and take on most of the unit's commercial real estate exposure of 6.2 billion pounds.
NAB announced the review of its UK unit in February after concluding the UK economic recovery would take much longer than previously expected, and to arrest the rise in bad debts that were weighing on the group.The move follows a 2004 review of UK operations that led to the sale of its Irish banks and a broader review of the group in 2009 where it hived off some of the UK assets into a vehicle called the Specialised Group Assets.
"They're focusing on the good bits...and ultimately trying to make that business a lot more profitable and potentially one day in the future more attractive to someone else, would be my guess," said Andrew Martin, a portfolio manager at Alphinity Investment Management, which manages more than A$300 million in funds.
"But that's not a near term thing. That's a long term thing," Martin said.
NAB said on Monday its first half cash earnings was seen at A$2.82 billion up 5.7 percent on-year, in line with analysts' expectations. On a statutory basis, net profit would fall 15.6 percent to A$2.05 billion to reflect non-cash charges largely from UK. NAB reports first half earnings on May 10. The UK unit was seen posting a loss of 25 million pounds in the first half.
In addition to 195 million pounds in restructuring costs, NAB will write down the goodwill associated with Clydesdale by 141 million pounds and set aside a further 120 million pounds in payment protection insurance.
Profits were roughly in line with what some analysts expected, although bad debt charges rose 14 percent to A$1.13 billion. NAB said it expected to increase its interim dividend to 90 cents a share.
NAB said the changes would cut the UK unit's reliance on wholesale funding that had become expensive after credit rating downgrades, move the business to a more deposit-funded base and reduce group funding support to the UK unit by 5 billion pounds.
NAB said an immediate sale of the unit, valued by analysts at $5.5 billion, was ruled out because it would fetch less than book value.
The transferred commercial real estate portfolio will be run off as the assets reach maturity.
The restructure would cut the stand-alone Tier I capital ratio, a measure of a bank's ability to absorb losses, of the group by 17 basis points. NAB said its group Tier 1 capital ratio would be about 10 percent as at March 2012.
NAB shares were flat in late morning trade on Monday lagging the 0.5 percent rise for the broader market. The shares have risen 7.6 percent so far in 2012, but NAB is the second-worst performer among Australia's top four banks.
NAB's latest move extends the poor track record for Australian banks' offshore forays, including NAB's A$3 billion in writedowns on its Homeside business in the United States and Australia and New Zealand Banking Group's exit from Grindlays in India and the Middle East in 2000.
(Reporting by Sonali Paul and Narayanan Somasundaram; Additional reporting by Amy Pyett; Editing by Lincoln Feast and Eric Meijer)

Posted by Premier Gold Group at 12:04 AM