China has tightened its rules on internet usage to enforce a previous requirement that users fully identify themselves to service providers. 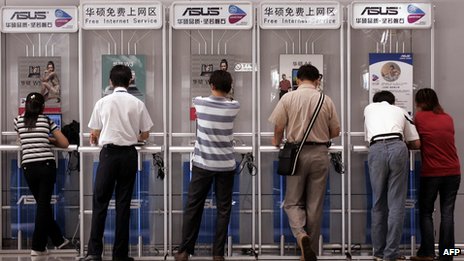 Hundreds of millions of people in China use the internet, although its content is closely monitored by the authorities
The move is part of a package of measures which state-run Xinhua news agency said would protect personal information.
But critics believe the government is trying to limit freedom of speech.
The announcement will be seen as evidence China's new leadership views the internet as a threat.
The Chinese authorities closely monitor internet content that crosses its borders and regularly block sensitive stories through use of what is known as the Great Firewall of China.
However, it has not stopped hundreds of millions of Chinese using the internet, many of them using micro-blogging sites to expose, debate and campaign on issues of national interest.
In recent months, the internet and social media have been used to orchestrate mass protests and a number of corrupt Communist Party officials have been exposed by individuals posting criticisms on the internet.
The new measures come a month after a new leadership, led by Xi Jinping, was installed by the ruling Communist Party.
The new man in charge of the internet, Liu Qibao, has a reputation for taking a hard line on media control. He recently called for "more research on how to strengthen the construction, operation and management of the Internet and promote mainstream online themes".
'Safeguards'
The new measures now formally require anyone signing agreements to access the internet, fixed-line telephone and mobile devices to provide network service operators with "genuine identification information", known as real-name registration, Xinhua reports.
Real-name registration was supposed to be have been implemented in 2011 but was not widely enforced.
China's biggest internet firm, Sina Corp, warned earlier this year in a public document that such a move would "severely reduce" traffic to its hugely-successful micro-blogging site Weibo, China's equivalent to Twitter with more than 300 million users.
Under the new rules, network service providers will also be required to "instantly stop the transmission of illegal information once it is spotted" by deleting the posts and saving the records "before reporting to supervisory authorities".
The measures are designed to "ensure internet information security, safeguard the lawful rights and interests of citizens... and safeguard national security and social public interests", and were approved by China's top legislature at the closing session of a five-day meeting on Friday, Xinhua reports.
The calls for tighter controls of the internet have been led by state media, which said that rumours spread on the web could harm the public and sow chaos and confusion.
The government has said officially that it welcomes the exposure of official abuses, but a new generation of ever bolder bloggers and commentators pose a threat that the leadership seems determined to counter, the BBC's Charles Scanlon reports.