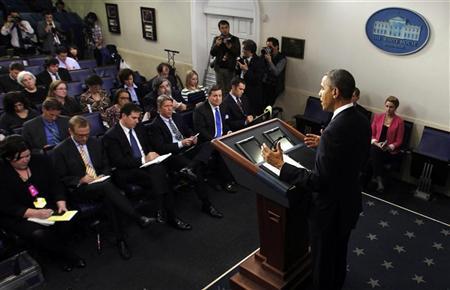 U.S. President Barack Obama speaks about the fiscal cliff in the briefing room of the White House in Washington December 21, 2012.
Credit: Reuters/Kevin Lamarque
By Thomas Ferraro and Alina Selyukh
WASHINGTON | Mon Dec 24, 2012 3:46pm EST
(Reuters) - With only a week left before a deadline for the United States to go over a "fiscal cliff," lawmakers played a waiting game on Monday in the hope that someone will produce a plan to avoid harsh budget cuts and higher taxes for most Americans from New Year's Day.
Though Republicans and Democrats have spent the better part of a year describing a plunge off the cliff as a looming catastrophe, the nation's capital showed no outward signs of worry, let alone impending calamity.
The White House has set up shop in Hawaii, where President Barack Obama is vacationing.
The Capitol was deserted and the Treasury Department - which would have to do a lot of last-minute number-crunching with or without a deal - was closed.
So were all other federal government offices, with Obama having followed a tradition of declaring the Monday before a Tuesday Christmas a holiday for government employees, notwithstanding the approaching fiscal cliff.
Expectations for some 11th-hour rescue focused largely on Senate Minority Leader Mitch McConnell, a Republican, in part because he has performed the role of legislative wizard in previous stalemates.
But McConnell, who is up for re-election in 2014, was shunning the role this year, his spokesman saying that it was now up to the Democrats in the Senate to make the next move.
"We don't yet know what Senator Reid will bring to the floor. He is not negotiating with us and the president is out of town," said McConnell's spokesman, referring to Senate Majority Leader Harry Reid, a Democrat. "So I just don't know what they're going to do over there," he said.
Two-day-old tweets on leadership websites told the story insofar as it was visible to the public.
House Speaker John Boehner's referred everyone to McConnell. McConnell's tweet passed the responsibility along to Obama, saying it was a "moment that calls for presidential leadership."
Reid's tweet said: "There will be very serious consequences for millions of families if Congress fails to act" on the cliff.
The next session of the Senate is set for Thursday, but the issues presented by across-the-board tax hikes and indiscriminate reductions in government spending, were not on the calendar.
The House has nothing on its schedule for the week, but members have been told they could be called back at 48 hours notice, making a Thursday return a theoretical possibility.
However, aides to the Republican leaders in Congress said there were no talks with Democrats on Monday and none scheduled after negotiations fell off track last week when Boehner failed to persuade House Republicans to accept tax increases on incomes of more than $1 million a year.
"Nothing new, Merry Christmas," an aide to Boehner responded when asked if there was any movement on the fiscal cliff.
SCALED-BACK EXPECTATIONS
If there is some last-minute legislation, Republicans and Democrats agreed on Sunday news shows that it will not be any sort of "grand bargain" encompassing taxes and spending cuts, but most likely a short-term deal putting everything off for a few weeks or months, thereby risking a negative market reaction.
A limited agreement would still need bipartisan support, as Obama has said he would veto a bill that does not raise taxes on the wealthiest Americans.
On Monday, Texas Senator Kay Bailey Hutchison urged fellow Republicans to be flexible.
"We're now at a point where we're not going to get what we think is right for our economy and our country because we don't control government. So we've got to work within the system we have," she told MSNBC.
Two bills in Congress could conceivably form the basis for a last-minute stopgap measure.
Last spring, Republicans in the House passed a measure that would extend Bush-era tax cuts for everyone, reflecting the party's deep reluctance to increase taxes.
The Democratic-controlled Senate passed a bill in August, extending lower tax rates for everyone except the wealthiest Americans - a group defined at that point as households with a net income of $250,000 or above. Obama has since increased that to $400,000 a year, in an effort to win Republican support.
Analysts say Democrats might be able to get the backing of enough Republicans in both the House and Senate, especially if they are willing to raise the number to $500,000.
Under that scenario, lawmakers might also put off spending cuts of $109 billion that would take effect from January and agree to Republican demands for cuts in entitlement programs such as Medicare and Medicaid, the government-run health insurance plans for seniors and the poor.
However, with only a few work days left in Congress after Christmas, there is a good chance that no deal can be worked out and tax rates would then go up, at least briefly, until an agreement is reached in Washington.
"We may go off the cliff on January 1, but we would correct that very quickly thereafter," Democratic Representative John Yarmuth told MSNBC.
The prospects of the United States going over the fiscal cliff dampened enthusiasm on Wall Streetfor a "Santa rally" in the holiday season, when stocks traditionally rise.
The Dow Jones industrial average dropped 51.76 points, or 0.39 percent, in Monday's shortened holiday session.
Failure to work out tax rates in the coming days would cause chaos at the Internal Revenue Service, said analyst Chris Krueger of Guggenheim Securities.
"Next weekend is going to be a total, total debacle," he said. The IRS is unlikely to have enough time to revise its tables for withholding taxes.
"The withholding tables are sort of like an aircraft carrier, you can't turn the thing on a dime." he said.
(Additional reporting by Alina Selyukh, Patrick Temple-West and David Lawder; Editing by Alistair Bell, Fred Barbash and David Brunnstrom)
Posted by Premier Gold Group at 1:56 AM