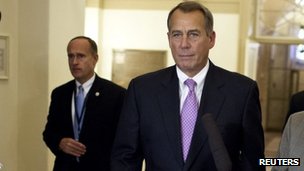 The pace of negotiations between John Boehner and Barack Obama has picked up in recent days
Mr Boehner has signalled he would agree to raising tax rates for those earning more than $1m (£620,000) per year.
The 45-minute meeting follows face-to-face discussions on Thursday and a phone call between the two on Friday.
A deal must be reached by 1 January, or a combination of steep tax rises and sharp spending cuts will take effect.
Mr Boehner has reportedly also said he would accept as much as $1tn in new tax revenue over 10 years and would raise the debt ceiling to ensure the government is funded for a year.
In exchange, it is reported that he would like the White House to agree to $1tn of spending cuts.
"Our position has not changed. Any debt limit increase would require cuts and reforms of a greater amount," Boehner spokesman Brendan Buck told the Associated Press.
Neither side has released details from Monday's meeting.
'Necessary balance'
White House Press Secretary Jay Carney acknowledged on Monday that there had been a "change in tone, and in some cases, a change in position from different Republicans" on the issue of tax increases.
But he added: "Thus far the president's proposal is the only proposal that we have seen that achieves the balance that's so necessary."
The president's proposal to avoid the fiscal cliff had called for $1.6tn in new tax revenue over 10 years. Mr Obama has previously insisted that he will not sign a deal that does not raise tax rates on earnings over $250,000.
More recently, the White House has suggested it would agree to a deal that generates less new tax revenue. Many Republicans are philosophically opposed to raising taxes.
As the parameters of a possible deal begin to take shape, correspondents say there may now be renewed focus on whether Democrats agree to changes to popular entitlement programmes.
Harry Reid, the top Democrat in the Senate, has indicated that it is likely lawmakers will need to return to Washington between Christmas and New Year to vote on a deal to avert the fiscal cliff.
"We will see if anything changes, but it appears that we're going to be coming back the day after Christmas to complete work on the fiscal cliff," Mr Reid said on Monday.
Details of a deal
Correspondents say about $450bn from Mr Boehner's offer of $1tn in new tax revenue would be generated by increasing the tax rate to 39.6% from 35% for income over $1m.
The remainder would come from closing loopholes and limiting tax deductions, and by slowing inflation adjustments to tax brackets.
The $1tn in spending cuts that Mr Boehner is said to have asked for are expected to come primarily from healthcare programmes for the elderly, they say.
But some Democrats have indicated they are not prepared to consider such changes to major government provisions.
Economists have warned that the "fiscal cliff" would suck about $600bn out of the economy, possibly sending the US, which is experiencing a tepid economic recovery, back into recession.
The measures were partly put in place within a 2011 deal to curb the yawning US budget deficit.
Along with the tax rises and spending cuts due to take effect on 1 January, extended benefits for the long-term unemployed and a temporary cut to payroll taxes are also scheduled to expire at the end of the year.
Business leaders and Ben Bernanke, chairman of the US Federal Reserve, have warned that uncertainty over the fiscal cliff is already having a negative effect on the economy.
International observers, including Christine Lagarde, head of the International Monetary Fund, have warned that effects of going over the fiscal cliff would ripple out to the rest of the world.

What is the fiscal cliff?