By Roger HarrabinEnvironment analyst
The government has given the go-ahead for a firm to resume the controversial technique known as fracking to exploit gas in Lancashire. 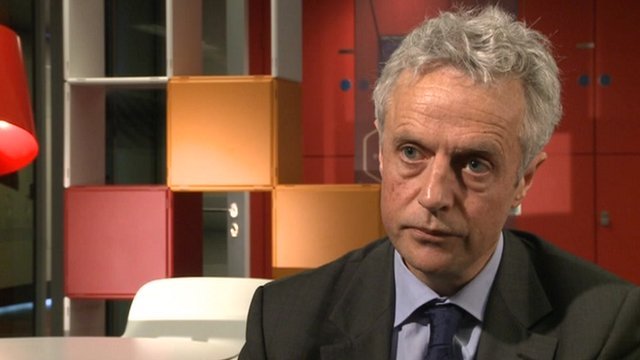 Cuadrilla CEO Francis Egan: "The country is running out of gas, our choice would be to develop our own shale gas resources"


The company, Cuadrilla, was stopped from fracking after two tremors near Blackpool.
Conditions have been imposed to minimise the risk of seismic activity.
Fracking involves creating little explosions underground, then injecting water and chemicals to release gas trapped in cavities in shale rocks.
The Energy Secretary Ed Davey said shale gas was a promising new potential energy resource for the UK. It might contribute significantly to energy security and substitute for imports which are increasing as North Sea gas is decreasing.
But he warned against over-excitement: "We are still in the very early stages of shale gas exploration in the UK and it is likely to develop slowly.
"It is essential that its development should not come at the expense of local communities or the environment. Fracking must be safe and the public must be confident that it is safe."
He said the government had uncovered management weaknesses in Cuadrilla following the minor earthquakes. These had been put right, he said.
He said impacts on water and local air pollution were already covered by the UK's existing "stringent" rules on oil and gas.
'Better solution'
Mr Davey said the advent of shale gas would not weaken the UK's legally binding targets to cut greenhouse gas emissions. He announced a study from the Department for Energy and Climate Change (DECC) chief scientist David McKay on the impact of shale gas on climate change.
But he asked: "Is it not better that we produce gas in this country than gas shipped half way across the world?" He said his view was that, overall, greenhouse gases from shale gas in the UK might only be slightly greater than importing gas exploited in the conventional way.
In the US, exploitation of shale gas boom has sent energy prices tumbling, and the Prime Minister has expressed hopes that the UK can enjoy a similar boom.
But government advisers warn today that shale gas may be unlikely to bring down energy prices much in Britain.
In fact, the Committee on Climate Change warns that relying heavily on gas for future electricity supplies would leave households vulnerable to higher bills in the long run as the price of gas on the international market is volatile.
The UK won't benefit from substantially lower prices unless the rest of Europe decides to back shale gas too, as Europe has a gas grid that allows gas to be traded to the highest bidder.
The CCC has examined the potential impact on bills of different energy systems and predicts that subsidies to renewables and nuclear would put about £100 on household bills by 2020, but that by 2050 a gas-based electricity system might cost people as much as £600 extra.

Today's fracking decision has created political excitement as the Prime Minister the Chancellor and some business leaders have spoken enthusiastically about shale gas.
Environmentalists are more cautious following incidents in the US in which fracking has been associated with pollution of water through the chemicals involved in the process, as well as leakage of methane - a powerful greenhouse gas as well as a local air pollutant.
They say fracking will generate much more opposition in the UK than it has in the US as it involves turning green fields into industrial sites.
They also worry that an abundance of domestic gas will tempt politicians to abandon targets for cutting greenhouse gases, which are rising inexorably globally to the alarm of scientists.
A poll suggested that people would prefer to have wind turbines on the horizon than gas rigs.
Steve Radley, Director of Policy at EEF, the manufacturers' organisation, said the UK should do whatever possible to keep energy costs down: "This is a major threat that needs to be addressed now as we cannot continue to load industry with costs which are in excess of our competitors.," he said.
Caroline Flint MP, Labour's Shadow Energy Secretary, said: "Labour has always said that fracking should only go ahead if it is shown to be safe and environmentally sound. If the Government believes that this is the case then we will look carefully at their proposals.
"But the idea that this form of gas extraction can have the same impact here in the UK as it has had on gas prices in the United States is considered wishful thinking by most experts."

Posted by Premier Gold Group at 12:30 AM