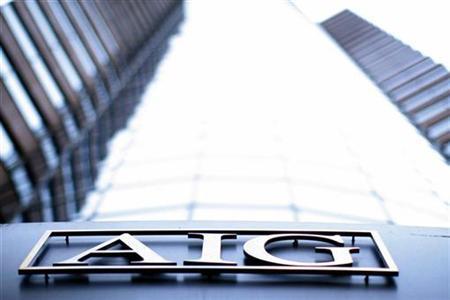 The logo of American International Group (AIG) is seen at their offices in New York September 18, 2008.
Credit: Reuters/Eric Thayer
By Rick Rothacker and Rachelle Younglai
Tue Dec 11, 2012 9:00am EST
(Reuters) - The U.S. Treasury's sale of its remaining stake in American International Group Inc (AIG.N) will fetch $7.6 billion, bringing the government a total profit of $22.7 billion from its crisis-era bailout of the insurer.
The share offering will close the chapter on one of the most politically contentious rescues of 2008, which ultimately gave AIG up to $182 billion of government support.
At one point, the government estimated that it would never recover all of the bailout money, but as AIG restructured and returned to viability, it was able to repay the entire rescue fund plus generate a profit for U.S. taxpayers.
AIG said on Tuesday that the Treasury agreed to sell 234.2 million shares to investors for $32.50 apiece. The insurer said that Treasury has additional AIG warrants that it can sell to boost the government's $22.7 billion of total returns so far.
"No taxpayer should be pleased that the government had to rescue this company, but all taxpayers should be pleased with today's announcement, ending the largest of the government's financial industry bail-outs with a profit to the Treasury Department," Jim Millstein, the Treasury's former chief restructuring officer, said Monday in a statement. AIG was rescued just before it would have been forced to file for bankruptcy protection in September 2008 as losses on risky derivatives mounted. It was bailed out as the world's financial system stood at the brink of disaster, shortly after Lehman Brothers filed for bankruptcy and Merrill Lynch sold itself to Bank of America Corp (BAC.N).
AIG was one of the Treasury Department's most hotly contested bailouts. U.S. lawmakers began calling for Treasury Secretary Timothy Geithner's resignation after it was revealed that AIG paid $165 million in retention bonuses to employees of the derivatives unit that has been blamed for the company's financial distress at that time.
It prompted Republican lawmaker Charles Grassley to call for AIG executives to resign or commit suicide, though the Iowa senator eventually backtracked from those comments.
The company also funneled over $90 billion of taxpayer money - more than half the funds the government used to rescue AIG - to various European and Wall Street banks, including Goldman Sachs, Deutsche Bank and Barclays Plc (BARC.L).
The sale price of $32.50 represents a 2.6 percent discount to AIG's Monday close of $33.36. The sale is due to close on Friday. AIG's shares rose 1.6 percent in pre-market trading on Tuesday to $33.90.
BENMOSCHE GETS CREDIT
Robert Benmosche, the former CEO of MetLife (MET.N), took over as CEO of AIG in August 2009, replacing Edward Liddy, who had been installed by the U.S. government. He will ultimately get the lion's share of the credit for turning the company around and preventing a fire sale of its assets.
Benmosche salvaged some of the company's businesses, defended the company's employees against their detractors and figured out a path forward that would let the company both repay the government and stay in business.
In September, he said the company may be in a position to consider a dividend by next summer.
"It was an ugly process," said Greg Valliere, chief political strategist with Potomac Research Group, but he added: "Bottom line is that the government made money."
Treasury and AIG said that the sale was jointly led by Bank of America Merrill Lynch, Citigroup (C.N), Deutsche Bank (DBKGn.DE), Goldman Sachs (GS.N) and JPMorgan Chase & Co (JPM.N).
The sale closes out AIG's bailout, but other companies

still owe the government. The latest Treasury estimate has the Troubled Asset Relief Program ultimately costing the U.S. taxpayers $60 billion. Among the companies still paying back the government are General Motors, (GM.N) auto lender Ally Financial Inc and a series of small banks.
(Editing by Alden Bentley)
Posted by Premier Gold Group at 12:30 AM