A team of former Nasa executives has launched a private venture to send two people to the Moon for $1.4bn (£871m). 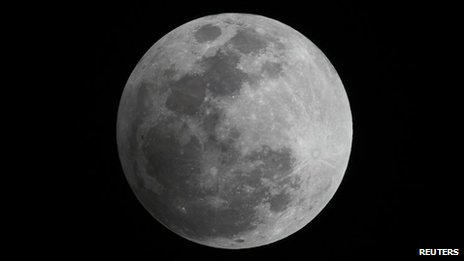 After the space race of the 1960s, interest in the moon for exploration has waned
Golden Spike Company says it will use existing rocket and capsule technology, and will aim for a first launch before the end of the decade.
The firm is one of many new private firms hoping to follow the success of Space X, which has ferried cargo to the International Space Station (ISS).
The US became the first and only country to reach the Moon in the 1960s.
But costs and waning interest has prevented any other lunar mission. US President Barack Obama cancelled a planned Nasa return to the moon, saying the US had already been there.
Golden Spike, run by former Nasa associate administrator Alan Stern, says it is looking offering voyages to the governments of other countries - such as South Africa, South Korea and Japan - expecting interest for scientific research or national prestige.
"It's not about being first. It's about joining the club," he said on Wednesday. "We're kind of cleaning up what Nasa did in the 1960s. We're going to make a commodity of it in the 2020s."
Odds against
The firm says it expects to make about 15 to 20 launches in total.
Golden Spike is full of space veterans: the board chairman is Apollo-era flight director Gerry Griffin, who once headed the Johnson Space Center.
Advisors include former a space shuttle commander and manager, former UN Ambassador Bill Richardson, engineer-author Homer Hickam as well as Hollywood directors and former House Speaker and space policy enthusiast Newt Gingrich.
However, Harvard University astronomer Jonathan McDowell, who tracks launches worldwide, told the Associated Press that many of the new space firms will fail before anything is built.
"This is unlikely to be the one that will pan out," Mr McDowell said, citing Golden Spike's hefty price tag.
Posted by Premier Gold Group at 12:00 AM