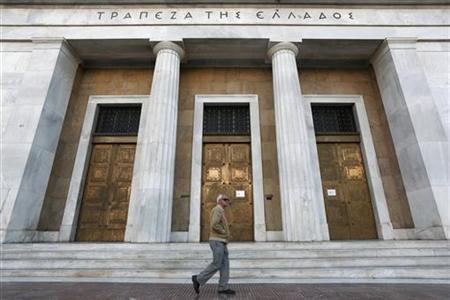 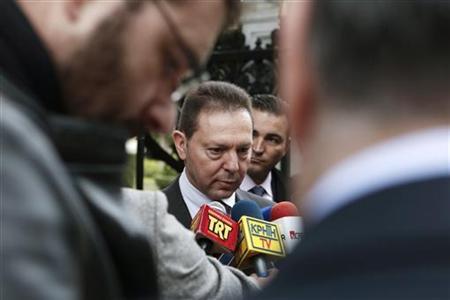 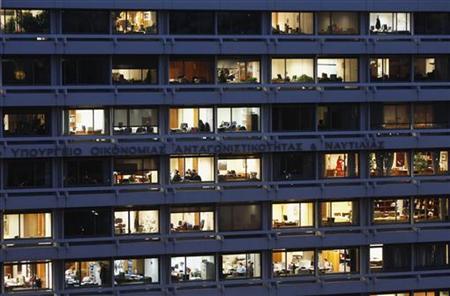 1 of 3. An elderly man walks outside the Bank of Greece in Athens November 9, 2012. Picture taken November 9, 2012. To match Special Report GREECE-CRISIS/PENSIONS
Credit: Reuters/Yorgos Karahalis
By George Georgiopoulos
ATHENS | Mon Dec 10, 2012 2:43am EST
(Reuters) - Greece is set to purchase back about half of its debt owned by private investors, broadly succeeding in a bond buyback that is key to the country's international bailout, a Greek government official said on Saturday.
Greek and foreign bondholders offered the targeted 30 billion euros ($38.8 billion) in the deal, which is central to efforts by Greece's euro zoneand International Monetary Fund lenders to cut its debt to manageable levels.
"The buyback went well in broad terms. The amount offered by investors was within the range expected, about 30 billion euros," the official told Reuters on condition of anonymity. He did not provide more details.
No formal announcement is expected before Monday, another official told Reuters.
The buyback accounts for about half of a broader, 40-billion euro EU/IMF debt relief package for Athens agreed in November. The package broadly doubles the average maturity of its rescue loans to almost 30 years and cuts its interest rates by one percentage point to a level far below 1 percent.
Under its terms, Athens will spend up to 10 billion euros of borrowed money to buy back bonds with a nominal value of about 30 billion euros. This is nearly half the 63 billion euros of Greek debt held by private investors eligible for the plan.
Since the bonds are to be bought far below their nominal value, the country's net debt burden would fall by about 20 billion euros.
A successful buyback will ensure that the IMF, which contributes about a third of Greece's bailout loans, will stay on board of the rescue. It would also unlock the payment of 34.4 billion euros of aid later this month.
Athens badly needs that money to refloat its ailing economy by replenishing the capital of its cash-strapped banks and settle arrears with government suppliers.
The EU and the IMF have been withholding rescue payments to Greece for six months because it had fallen short of promises to shore up its finances, privatize and make its economy more competitive.
Athens has received 148.6 billion euros in EU/IMF funds since May 2010. It stands to get almost 90 billion euros more by the end of 2014.
But the rescue comes at a heavy price. Austerity measures taken in exchange for aid have plunged the country into economic depression. Unemployment hit a record 26 percent in September, the highest in the euro zone.
The economy is going through its fifth consecutive year of recession and is expected to have shrunk by 24 percent when recovery begins in 2014.
GREEK BANKS ON BOARD
The buyback was expected to go well after Greek banks, which hold about 17 billion euros of bonds, announced shortly before a Friday deadline they would take part. Two Cypriot lenders also said they would offer their bonds.
Foreign investors have offered between 15 and 16 billion euros worth of bonds, Greek newspapers reported on Saturday, citing initial estimates without saying how they got them.
Athens' hopes of drawing enough investors to the scheme grew after it announced better-than-expected terms on Monday, with price ranges at a premium over market prices.
The price range varied from a minimum of 30.2 to 38.1 percent and a maximum of 32.2 to 40.1 percent of the principal amount, depending on the maturities of the 20 series of outstanding bonds.
Hedge funds, which bought the debt at rock-bottom prices when it was feared the country would exit the euro, are estimated to hold a large part of Greek debt and the offer was seen as good enough to make them a nice profit.
"Athens put forth a reasonable if not generous offer for hedge funds to participate," Sassan Ghahramani, CEO at New York-based Macro Advisers, a hedge fund consultancy, said on Friday.
"I expect there will be strong participation from hedge funds, tendering a substantial portion of their Greek bond holdings," he said.
The government also enticed Greek bankers by offering to protect them from possible shareholder lawsuits stemming from the buyback.
Greek bankers had been reluctant to take part, in the fear they would book losses on top of the ones they incurred earlier this year when Athens enforced a debt cut on its bondholders.
But the lenders were nevertheless expected to participate because they depend on the bailout funds that Athens stands to receive if its bailout continues smoothly.
($1 = 0.7735 euros)
(Writing by Harry Papachristou; editing by James Jukwey)
Posted by Premier Gold Group at 12:24 AM